Today, I washed my clothes. After a long while without washing, it felt liberating doing it. My back of course tells different stories, so do my fingers. It is still true that the skin on the fingers peels off during washing. Enyabakeikuru, we call it in Rukiga. Some of my favorite shirts are growing old. Some are getting torn at the collars. They deserve some rest.

I think I will be doing this washing every after two weeks. It has been the longest I have spent away from a phone and laptop, except when asleep or traveling. This is good. I think.

I have not always liked washing. Maama washed for me, till age ten and thereabouts. She claimed that it was important to learn how to wash, in preparation for secondary education, so she permanently stopped washing for me. The few times I had washed for myself before ten were when I would live in other homes, not our own. There would be no Maama to do the washing, so I had to learn how to help myself.

Anyways, I never really learnt how to wash properly until I got to Boarding School. The older boys would give us clothes to wash for them. It was a gentle way of bullying us. Of course we had to wash for them on top of washing for ourselves. The business of washing for older boys stopped when I joined Form Three. But I still never liked washing, even if now, the worry was only my clothes. At Form Three, one is considered an older boy, so some actually give away their clothes to be washed by the Form One and Two boys. I was even a House Prefect in my Form Three. I do not remember bullying younger boys in this way. What I remember doing was giving away some money, or some millet flour or some sugar, or some biscuits, or slices of bread to some boys to wash for me in return.

Kigezi High School, where I studied (Photo by Moses Karugaba)

As I grew, Form Four, Five and Six, I grew to learn to love washing for self. I joined university aware that I would wash for self. Midway, I started paying some older women who would hang around the males’ halls of residence to do the washing for us, of course in return for payment. I even befriended one, so much that sometimes she would wash for me on credit. We were friends. Other times, she would borrow money from me, in return for future washing. But there are times I would still wash for self, say when chronically broke or when I felt like it. Yes, there are times I feel like washing.

I left the university hall of residence in my Fourth Year and started renting somewhere outside the university campus. It was not easy at first to find the casual washing labour, so I would carry my clothes to a laundry service at the postgraduate hall. The prices were high, but the worry of a brush being used on my jeans disappeared. The laundry service would use a machine. Of course some of my clothes responded badly to the machine-wash. Anyways, we later found the laborers who relieved me of the machine worries.

Then, after university, I shifted again. I enrolled for a postgraduate course that necessitated the migration. I left this new place, for Hungary before I could find a washing service. I absolutely hated the washing for self in this time. The weekly academic work was heavy, but I also was doing other things besides studying, so washing was an inconvenience by any measure.

It was in Hungary that I missed the washing. I felt like washing with my hands several times but where I was living could not allow it. There was a laundry service, so all I had to do was buy detergent and find time to go put the clothes in the machine, set it and return to pick them and put them in the dryer. One of the things I was looking forward to doing on returning to Uganda, was washing for self, using hands. 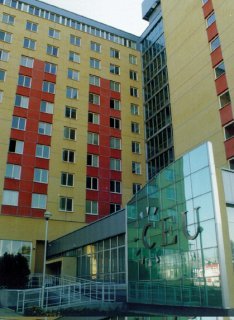 The CEU Residence Centre had a laundry service (Photo by http://www.hotelbeds.com)

Return, I did. And wash for self, I also did. I was putting off a whole day to do the monthly washing then. I went through three different houses and places in Kampala, so even when I became too busy, I still had to do the washing because I was migrating almost after every three-four months. Too fast to find someone to help with the washing.

Anyways, I have for the last six months stayed somewhere semi-permanent and it was possible to have someone wash for me. Even take the clothes to a laundry service. And it has become hard to find time to do my own washing. Out of convenience, I took my clothes to the laundry service, and to some woman who washes. Anyways, I have lost a few favorite shirts to the laundry service and to the casual wash-labour, so a month ago, I decided that I shall not take my clothes to these people. As a result, I have had to buy a few new clothes for failure to locate time to wash the dirty ones.